Flight Design general aviation returns from Aero Friedrichshafen 2022 with exciting news. The Aero Exposition was very busy and very productive for Flight Design, proving again the value of face-to-face meetings and the greatly valued support of our owners. The Flight Design display included the recently Type Certified F2-CS23, a Fuel injected CTLSi 2020 GT with a full Garmin suite and the F2e in its most recent form, the F2e HyFly, more about that below.

The F2e on display was originally developed and successfully flight tested in 2019. The Project HYFly is a technology development program co-initiated by Flight Design’s major shareholder LIFT Air. The F2e HyFly is being shown as a proof-of-concept of what can be done in the future to bring the new Green Hydrogen benefits to light plane uses. The Project HyFly is a joint venture of KasAero, PS-HyTech and Flight Design. 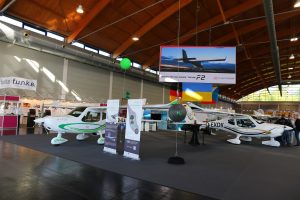 The F2e with the debut of ‘Project HyFly’ is just the latest step in Flight Design’s pursuit of sustainable aviation training. Flight Design has embraced the urgent need for reducing the environmental impact of flight since its acquisition by LIFT Air in 2017.

As a result of this forward-thinking and the promise of the F2e concept, Flight Design has started a business relationship with the eFlight Academy, Europe’s first all-electric flight school. Based in the Netherlands, eFlight is a true pioneer in sustainable flight training and Flight Design is excited to be chosen by them. The cooperation includes the F2e project, sales of the F-Series and Simulators.

One of the highlight events during Aero each year is the much anticipated, Flieger Magazine annual award ceremony. This year’s Best New Aircraft is the Flight Design F2! “We are very proud to be chosen for this honor, said Flight Design CEO, Daniel Guenther. There are many exciting aircraft in the market currently and be chosen for this is a tribute to the hard work done by our team to make this happen”. The F2-CS23 was the subject of a complete flight review in the 02/2022 issue.

There is significant demand for a new technology flight training aircraft in Europe, Asia and North America and the type-certified F2-CS23 for Day and Night along with the F2-CS23 IFR variant are aimed directly at those markets. Flight Design has already booked significant orders and preorders from commercial flight schools in Germany, USA, France and India. The validation process of the EASA certificate of F2 has been started in China, India and US.

Despite the challenge of the conflict in Ukraine where the primary Flight Design production facility is located, there is progress for the future. “The good news at this time is that the factory in Kherson is intact, some work is continuing and most of our workers are either staying safe at home or have left the area temporarily.”, said Daniel Guenther, Flight Design CEO. “Also, a fund was set up by Flight Design to support the staff in Kherson which is being distributed successfully.”

Presentation from the press conference at AERO 2022