Flight Design, the European manufacturer of the F2 and CT series of aircraft reports that both sales and interest were strong at this week’s Airventure airshow at Oshkosh. 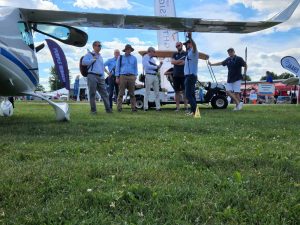 “We were very pleased with the amount of interest and new contracts taken at this year’s show,” said Daniel Guenther, CEO of Flight Design general aviation. “We are now taking orders for new aircraft and the response at the show was very positive”. There is strong interest in the type-certified version of the F2-CS23 from flight schools. Validation of the EASA CS-23 certificate has begun with the FAA.

Flight Design has progressed with the move to manufacturing airframes from Ukraine to Sumperk in the Czech Republic and expects the first new planes to be delivered in October of this year. Flight Design has had a facility in Sumperk since 2018 and the expansion there has gone well.

In other news, longtime Flight Design distributor Airtime Aviation of Tulsa Oklahoma is taking over the importation of aircraft and parts from Flight Design USA. “We have been working with Flight Design since the beginning,” said Tom Gutmann Jr. of Airtime. Our company has sold more Flight Design aircraft than anyone else in the world and it was natural for us to move up to the next level”, said Tom.

Flight Design´s USA Tom Peghiny will move into a consultant position at Flight Design and will support the sales network, development projects and business development. “Tom has been the face of Flight Design in the US and we are very thankful for how he has built up the Flight Design brand in the US. We are happy to follow up the cooperation with him and having “Flight Designs secret weapon” Airtime moved in the Importer position” said Daniel Günther.

Flight Design general aviation has over 65 firm orders for its aircraft series currently and expects to deliver new aircraft at a rate of 3 a month by the end of 2022.

The focus in development is now on the IFR version of the F2 and the F4 prototype. And the F2E project is on its way to be Flight Designs contribution for sustainable aviation. More news to come.