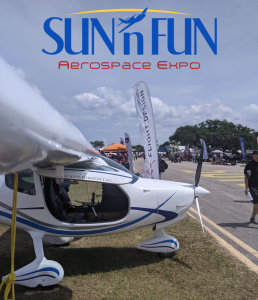 “It was anyone’s guess as to how the show would turn out,” said FLIGHT DESIGN USA President Tom Peghiny. With the recent shutdown of most public events worldwide, we really had no idea how many people would attend. We were pleasantly surprised with just the right amount of people every day. We had arranged our booth to promote airflow with fans and a second open tent for keeping out of the strong Florida sun.” said Tom.

The Sun n’ Fun airshow which first began in 1974 is the second largest airshow in the United States with displays by the U.S. Airforce and the Navy’s Blue Angels, but also an important trade show for General Aviation, the Light-Sport Aircraft industry and Kitplane manufacturers.  This combination of factors makes it a very popular destination for pilots in the Spring.

“It was just awesome,” said Tom Gutmann Jr. of Airtime Aviation, the largest Light-Sport Aircraft dealer in the USA and longtime FLIGHT DESIGN Distributor for the central United States. We knew that everyone was aching for somewhere to fly to and everyone enjoys Sun n’ Fun 2021. We had an Orange custom CTSW with a paint scheme of Nemo the Disney video character and folks just loved it, but we were busy showing the F2-LSA to the many pilots and clients who have already ordered theirs.” 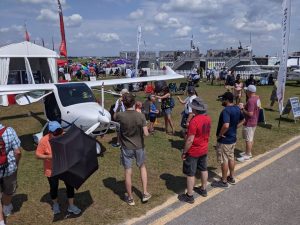 “I was very impressed by the qualified clients that showed up to see the F2-LSA in our booth said Walt Conlogue, owner of World Aviation in Wilmington NC. the Mid Atlantic distributor for FLIGHT DESIGN. People had been reading all the great publicity the F2 has received this last year and we were on their list for planes to check out during Sun n’ Fun, as a result, we are ordering planes just for stock”.

With the cancellation of AERO Friedrichshafen 2021 just announced, the aviation industry looks forward to EAA Airventure at Oshkosh, Wisconsin as the next major event in the aviation world from July 26th to August 1st. 2021, FLIGHT DESIGN general aviation will be located in booths 94, 95 and 96 where FLIGHT DESIGN USA will be displaying several aircraft including the production version of the F2-LSA, a CT-Super Sport and CTLSi-GT.