The F2-LSA which only a week before had been accepted by the FAA in Tulsa as a Special Light-Sport Aircraft (SLSA) was on display along with the F2 Proof-of-Concept aircraft and the popular Orange and White CT-Super ‘Nemo’ owned by Airtime Aviation of Tulsa Oklahoma. 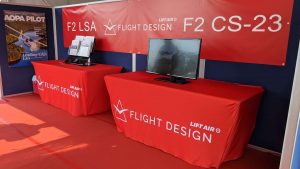 “We were extremely pleased to see our booth full of people coming specifically to see the new F2-LSA said Tom Gutmann Jr. of Airtime Aviation. With the FAA inspection and getting the plane ready for the show we have been really busy and this makes it worth all the work,” said Tom.

The EAA Oshkosh airshow is one of the largest airshows in the world annually, with 600,000 people in attendance, this year’s show was the largest yet. More than 10,000 aircraft visited or parked during the show and with more than 200,000 campers on-site the scope of the event is enormous.

“I had been waiting for a long time to see the production version of the F2-LSA said Walt Conlogue of World Aviation, Mid-Atlantic distributor for Flight Design. We are impressed by the quality of the new interior, the panel and the nice fairings on the flap system. We have two F2-LSA on order for customers and aft 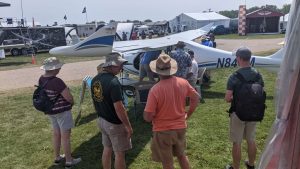 er seeing the response here we want to order two more. One for a demo aircraft and one to have for our inventory“.

We nearly filled up our guest book this year with folks who came by to see the new F2-LSA in its production form said Tom Peghiny, President of Flight Design USA, Importer for the Flight Design line of aircraft. We have had a lot of promotion lately with the acceptance of the F2 as an SLSA and the fact that airplanes are selling very strongly combined to make it very busy and exciting for us all week. The new F2 is a big improvement over the prototype which we have been flying for the last year. The general clean-up of the design, the new seats, and the Garmin ESP envelope protection was very popular.” said Tom. 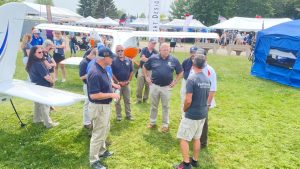 FAA administrator, John Dickson and his senior staff as well as the FAA Deputy Bradley Mims. Mr. Dickson asked several questions about the aerodynamics and the envelope protection of the F2-LSA. Both were impressed by the inclusion of the many advanced safety features into the design of the new F series aircraft.