Skip to content
News & Events
AERO FRIEDRICHSHAFEN 2022
FLIGHT DESIGN F2 EASA CS-23 CERTIFIED
EAA AIRVENTURE AT OSHKOSH 2021 A GREAT SUCCESS FOR FLIGHT DESIGN!
On Wednesday, June 5, 2019, the first public flight of the Flight Design F2e took place at the Strausberg airfield, near Strausberg Germany. The aircraft is based on the newly developed F2 from Flight Design with an integrated safety cell and is equipped with an innovative electric propulsion system. The creation of this important project was made possible by cooperation with our partners. The adaptation for the propulsion system was carried out in cooperation with Siemens Aircraft as the manufacturer and developer of the propulsion technology and APUS, a Strausberg-based company specializing in the development and integration of sustainable propulsion systems in aviation. 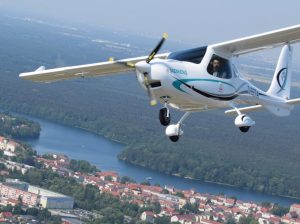 The first flight took place on May 29th and was a complete success. On June 5th, the project was presented to the media and the public. The project serves to gain knowledge on an environmentally-friendly flight with innovative propulsion concepts and on the safe integration of energy storage systems within the airframe. It represents the basis for further Flight Design projects for the development and certification of a practical electric aircraft. The Flight Design F2 is a high-wing strutless design that is largely manufactured using carbon fiber composite technology. The company is the market leader with 2000+ aircraft delivered and flying all over the world. The company’s focus is on Europe and the Americas as well as Asian markets through cooperation with local partners. The aircraft types “Ultralight” and “Light-Sport Aircraft” is 2-seater light aircraft, which have a take-off weight of 470-650 kg depending on the market and are very popular for initial training. Training is one area that generates the best opportunity for improvement in the environment for nature, nearby residents, and airfields as noise emissions are concentrated in that one place, the airfield, where future pilots spend a lot of time flying. With a wingspan of 9.2 m (31ft) and a modular manufacturing concept, the F2e is based on standard components that are used in the Rotax 912iS powered F2 variant. The propulsion system provided by Siemens eAircraft includes the 55 kW electric direct drive “SP55D”, an inverter, and the modular control system “EPUIII” consisting of the Vehicle Control Unit, Cockpit Control Unit, Battery System Master, and Power Supply Unit. The propulsion system has already been extensively tested in laboratory and ground tests as well as flight-tested for hundreds of flight hours under the supervision of Siemens eAircraft. The expectations were fulfilled with the successful first flight. Energy consumption for take-off and cruise was within the expected range, and the temperatures in the system were more positive than expected. Flight duration is not a focus at the moment. In the coming months, new energy storage systems with higher energy densities will be launched on the market. This makes the modular concept all the more important for quickly integrating future sources into the aircraft. Keeping the design open now for the energy storage of tomorrow is the more important development achievement and determines the progress of the project. Flight Design, Siemens, and APUS are working with international authorities to simplify the certification of electric aircraft of this class. These include the development of regulations for propulsion and energy storage. Flight testing of the F2e has only just begun and is currently focused on safely gaining the maximum experience with the Siemens eAircraft propulsion system. Flight performance statements can be made only after the completion of the tests. Loaded with batteries for about 2 to 3 hours of flight with two people onboard, a maximum take-off weight of 1100 kg is expected. The cruising speed is differentiated into maximum speed for short-range, which we expect to be approximately 210 km/h and the optimum speed for a long flight duration flight of approximately 170 km/h. Details will be available in the coming months. Flight Design general aviation would like to thank our partners for their efforts and professional support to get the project safely into the air and wish you good flights and Blue Skies!